Pauline Dakin was on the radio being interviewed this morning about her memoir, Run, Hide, Repeat 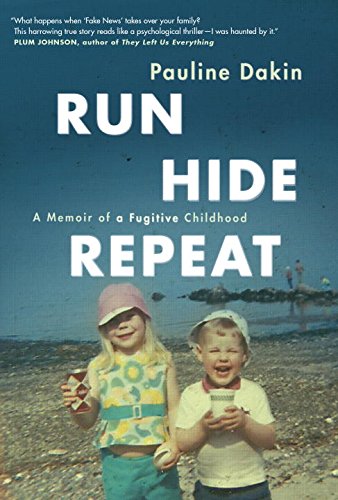 She described her childhood convinced along with her mother, that they were in hiding from the mob and always in danger. At some point, as an adult, she started to question the story that had ruled her life.  And without giving everything away, it turned out a family friend had convinced her mother this was the truth.

The commentator on WGN radio then brought up this Delusional Disorder as being something our current President has.  He made some very good points and also mentioned a book by two psychiatrists coming out giving credence to our President having this disorder.  Well, I don’t know if Donny boy meets all the criteria according to the DSM V, the book of psychiatric disorders, but it takes no expert to realize he lives a life based on delusion.  He has a delusion about the President being akin to being King, and that it should be punishable to question or critique him. Thus anyone or any press who does is fake and has some ulterior motive.

The commentator pointed out that Donny as a boy playing softball hit a double.  He promptly told his father when he arrived that he had hit a home run.  Thus, don’t deny this- Donny thinks he hit the home run, he thinks he won the popular vote and he truly believes everything he says- no matter how crazy. He believes his inaguration had the biggest attendance ever in history!  He is delusional on a daily basis and of course, most reasonable people are well aware of this and we’re just hoping to survive this 4 years without the country being completely destroyed.  The world at large feels our pain and our fears.

But lets go on.  Donny’s presidency may have actually accomplished something extremely important.  First he made the disgusting comments about a female newscaster “bleeding ” and the tapes came out about his “grabbing pussy” and the people in power just stayed quiet.  But then women decided not to be silent anymore.   We didn’t stop Donny.  But something else started to happen.  The bricks about women being abused from men in power really started to fall. It happened before Donny was running, people finally said enough to Bill Cosby.   Then Roger Ailes resigned and Sean Hannity resigned, and Harvey Weinstein was fired and removed from the Academy of Motion Picture Arts and Sciences.  Finally, women have found their voices.

If the next generations of women no longer stay silent, and all the abusers of power fall, something extraordinary and miraculous will have happened during this presidency.  Men misusing their power and money has been going on for a long time, few women haven’t been subjected to inappropriate behavior and advances in difficult situations.  All these terrible behaviors can only continue in a world where there is a conspiracy of silence.  Maybe that time is now coming to an end,  imagine a world where this is no longer the case.

6 thoughts on “Delusional Disorder From the White House to Yours”